On July 17, Dan Sallows, a columnist on the Bleacher Report wrote an article about Quenneville and his liking of Long Island Iced Teas. You can see Dan's story at: http://bleacherreport.com/articles/38795-the-nhl-insider-rumours-and-gossip-from-around-the-league.

Since Dan brought up the potential Iced Tea connection that we may have in our future, I decided to write about a tradition that we have amongst my friends that dates back to the 70's. In fact, Victory Iced Tea and the Esoteric's early beginings are married together. 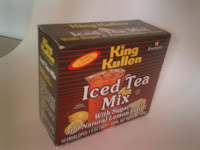 It’s called Victory Iced Tea. In reality, it is King Kullen brand Iced Tea Mix, that came in the black box, with 10 each 1.5oz. packets, UPC is 010500. The original product had to be from the packets in the box to be valid. Nowadays, with cost reduction, etc. Victory Tea can be found in packets in a plastic bag.

This and only this product, in the packets, has been known, by my family and friends as Victory Tea for four decades. YES, I said 4 decades. VT started for me when my cousin, Larry, who was from Nesconsett at the time, moved in with my Grandmother in East Meadow to attend Nassau Community College. Larry and his friends were all hockey fans and HUGE fans of the New York Islanders. Back then the games were primarily broadcast on Cablevision, this group of friends needed a place to go. Larry, as a college Kid, had cable and my grandmother let him and a half dozen friends stay and watch the games at her house. At the time I was about 10 years old and it was great spending time like that with my grandmother, cousin and his friends. As my own girls, Abby Nystrom, Ally Gillies and Amelia Potvin get older I will pass on the tradition to a fourth generation (4-G-er)of Islander fans. In fact, 4-G-ers have already made an impact as one of the original 6 friend's son actually works at King Kullen. The power of the Tea is just and almighty.

Victory Tea evolved with the Islanders prosperity and along with it came a ritual of the actual VT making process. VT originated in the early 70’s as the guys were underage and could not partake of malted beverages. VT was born and subsequently, we had almost 10 years to hone the process until the 1984 finals. Since that time, we have only had the opportunity to savor pure VT only 29 times in over 20 years and only 9 of those 29 pitchers of VT have been from the second round. Perhaps with the widespread knowledge sharing ability the power of VT can be regained and we can storm through the second round in the coming years.

The process must be followed to the “T”, anything else would be considered sacrilegious against the Islander gods and doom the team to a multi-game losing streak. I continue to question whether any of us had severely violated the VT code in the past which has led to the Islanders dry spell. Do not laugh VT is powerful stuff.

The ritual begins with the hermetically sealed packets. This is important because if any of the mix left the packet early or was exposed the VT would be tainted and destroy the powerful positive energy of the Victory Iced Tea. This seal can not be broken until victory is imminent. I remember times we have made VT too early and the Islanders lost. It has magical powers, do not question it. Original VT has to be made in a green Tupperware pitcher; you know the kind with the round lid that can be turned to allow for just liquid flow on one side or flow to allow ice cubes on the other.

VT evolved as a celebration of playoff victories and is the purest form of Victory Iced Tea. Over the years as I have been away from home for over 21 years in the US Army, Victory Tea has been my own private celebration abroad, after the team wins a game.

Realize that this year I have drank VT during different deployments to Iraq, Korea, Colombia, Poland and Czech Republic to name a few places. During past seasons I have carted VT with me to various corners of the globe and actually have drank of VT in a combat zone. It has been such a meaningful tradition with us that when my grandmother passed away about a year ago, we included a packet of VT when we sent her on her way, since she had always been a huge Islander fan and a 93 year resident of Long Island and East Meadow.

The actually process of making the VT starts with the actual decision to make the Tea. Since as I mentioned early, this is very powerful, you need to take caution and not open the packet too early. Once victory is imminent and you decide to make the Tea, carefully open the packet. Ensure that the packet remains as one piece and you do not tear the top off so there is two separate pieces. This would be considered bad. Next, you take the VT vessel and fill it with water. VT powder must not touch anything besides the packet it is delivered and water.

Once the packet is empty fill the packet with water, swish the water in the packet around and dump the residual water and mix into the VT vessel. This process ensures that all the mix is completely consumed from the tight seals of the packet itself. Place the torn top into as close of an original position as possible and fold the top over at least once. Place the empty packet near a central location in the room, such as the TV where you would watch the game. Nowadays, it would be deemed appropriate to keep it near the computer with the advent of the internet. You will need to keep this packet in hand until the next victory when the process is repeated and the old packet now is obsolete.

The choice of vessel is important. If you can find an old green tuppperware pitcher this will work the best and keep the Islander gods happy. However, whatever vessel you choose it must only be used for VT and nothing else. Once pure VT is made in a vessel it will serve only as the vessel to hold Victory Iced Tea.

The issue we face nowadays is that VT in it's purest form is harder and harder to find, even in the plastic bag pouches. After extensive research into the manufacturing process of VT, it is discovered that VT is actually made at 4C in Brooklyn, who knew it was made here on "Long Island". Yes, Long Island. What body of water do you cross to go from the coliseum to Brooklyn? None. Thus, Victory Tea is actually a Long Island based product.

Do not mess with the power of the Tea.

http://kingkullen.mywebgrocer.com/StoreLocator.aspx?s=4384250&f=cir
Posted by Islanders Esoteric at 8:55 AM